The Serious Work of Role-Play 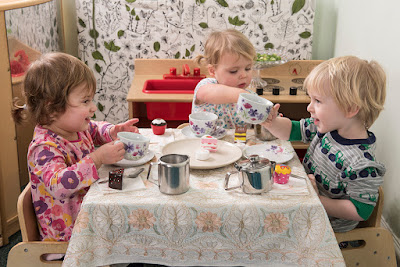 Role-play activities at home and school are significant learning times. Children are developing brain skills that allow them to pay attention, remember rules, and problem– solve. These skills are known as executive function skills, and they are essential for any learning.

Role-play also allows children to practice particular emotion-driven behaviors such as creating, fixing, nurturing, and teaching. These are also basic building blocks of future learning and work. Again, these cannot be taught with worksheets at tables. Instead, children learn through experiment, practice, and interaction. Role-play might be the most critical part of a young child’s day!

It is also essential to look at what role play does NOT do. It does not predict what a child will be interested in at a later date. Young children try on many different roles to learn from them and to see what fits and what doesn’t fit. My daughter loved playing with trucks and wearing construction hard-hats. As a three-year-old, when we passed road crews, she insisted that was what she wanted to be when she grew up. I did not put too much stock in this as I knew she also wanted to be a mermaid. As an adult, she is an elementary music and art teacher. However, playing with building toys and fixing toys as a child may have encouraged her to be interested in tools. She is the person in her family who is most likely to make a house repair, and I am proud to see that.

Role-play also does not push a child in a particular direction. It is not an indicator of gender confusion, nor will it encourage it. My son played with his sister’s dolls and dress-up clothing. He tried on many different roles, but it did not mess with his understanding of who God created him to be. I like to think that he practiced the skills of nurturing, which put him in a good position as a school IT person. He has infinite patience working with teachers and students when computers don’t work. I know this because I am one of those teachers.

When boys play with what we typically consider to be girlish toys or when girls play within boy dominated play areas, we might be tempted to worry that they are confused about their gender. In fact, true gender dysphoria is very rare and shows itself in much stronger symptoms. When children play, they are learning and growing, testing and trying, and developing in the way God designed their brains to mature.

Especially in a world where screens around every turn tempt children, role play is more important now than ever before. Parents and teachers should encourage role-play, as well as other play that involves children interacting with each other at every opportunity.
Posted by Kim Marxhausen at 10:29 AM No comments: